I've been appointed a delegate to the Edinburgh World Writer's Conference Canadian Section which is happening this week at the International Festival of Authors at Harbourfront. As a delegate, I go to panel discussions offered under the EWWC banner, sit in the front row, ask questions, contribute to the discussion. We're also invited to Tweet (which hasn't caught up to me yet) and/or blog (which has).

Thursday night's session was a two-part keynote address delivered by Britain's China Mieville and Canada's Miriam Toews. Mieville's analysis of the future of the novel was smart, funny, irreverent, and to the point. The gist: it's time writers recognized that the world has changed irrevocably; copyright and creative control of a work of art vanish once they're in the digital realm and we have to be prepared for a world in which fans, amateurs, and virtual revisionists will tamper cut and paste, alter, and generally play with our work. The business model for publishing is finished and copyright is meaningful only to those under the illusion that there's still money to be made in the marketplace by producing books. His suggestion: that a new system for establishing merit be established and that recognized authors be put on salary--a daring proposal in the current economic climate.

Toews delivered a reflection on the viability of a "National Literature" in today's world and confessed that she was dubious of the idea, largely because it opens the door to an author's becoming subject to artificial constraints and obligations imposed by prescribed notions of what a national literature should be. As an author, she said, you are "not a soldier." Your first duty is to "serve your story." And the only true literature is one that is constantly "falling short of certainty."

Hard to quibble with these fine speakers. The only caveat I would add to the discussion is that at the heart of the literary experience is a sense of the particular: of the individual reader engaging with an individual author who has concentrated whatever time, effort and talent they can muster to lend shape to the chaotic flow of our lives. Bring on the fiddlers and tamperers, but let's not forget what's at the heart of this process and do what we can to ensure that the particular voice of the dedicated author survives. Similarly, I think it's important that national voices are preserved. These too, are particular voices, however artificial the definitions we lend them. It's important we keep those definitions loose, but I value a world in which an Irish literature, a Kenyan literature, and a Canadian literature can exist side by side, if only as constructs that ensure that voices from all parts of the world are heard.

On Winning the 2012 Toronto Book Award 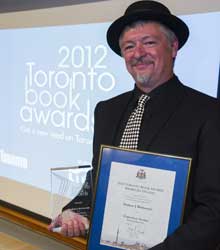 
I seem to remember bowing my head, readying my neck for the blow as City Councillor Gary Crawford fingered the envelope. Being half Polish, I’m genetically conditioned to prepare myself for the worst.


That’s all I heard—the first syllable of my name, then a whoop from the Cormorant cheering section. Then everything went silent for a few seconds until Martha shook me awake saying “OhmyGod, Andrew. You’ve WON!”


I had to get up there. I had to say something. Any shortlisted author will tell you that the worst part of the buildup to an awards ceremony is having to prepare an acceptance speech which—the odds are—you won’t get to give. I had made a few notes and now I couldn’t remember which pocket I’d stashed them in, so I winged it. I thanked everyone for turning up at the Appel Salon in the Toronto Reference Library, my favourite building in the City of Toronto,  a place I called a Treasure House of Stories. I thanked them because story telling is something we all do together: writers, readers, listeners, the people who make sell, lend, and organize events for books. I thanked the Toronto Book Awards committee—who review seventy-odd books, thrash out a short list and agree on a winner, as well as helping to set up events and raise the award’s profile, all on a volunteer basis. I thanked the gang at Comorant, my heroes. I thanked Martha for putting up with me as I’d been bumping into things and mumbling to myself in the days leading up to the ceremony (much as I’d been doing for the previous 27 years of our marriage).


Then I told a story I like to tell, about an afternoon almost 25 years ago, laying on a beach in Kenya and reading that year’s winner of the Toronto Book Award. We’d been living abroad for a time and were about to return to Toronto and I wasn’t convinced that going back to “Tomato, Can.” as Ezra Pound once called our fair city, was the best move for my literary career. But that book—Michael Ondaatje’s In the Skin of a Lion—convinced me that my home town was a place of mysteries and marvels and big ideas, and that it just might be worth a shot.


Then I thanked my fellow shortlisted authors—Dave Bidini, Farzana Doctor, Michelle Landsberg, and Suzanne Robertson—whose work is part of the proof, all these years later, that Mr. Ondaatje was right.
Posted by ANDREW J. BORKOWSKI at 2:29 PM 3 comments: