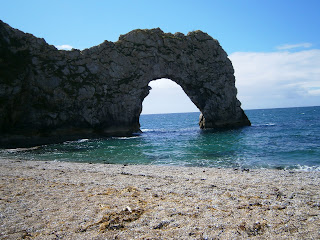 The first glorious rain-free day Britain has seen in six weeks, just in time for our visit to Lulworth Cove, a perfectly circular inlet in the cliffs along what the Brits call the Jurassic Coast (for its wealth of fossils).  We walk the coastal path (well-manicured by breath-stoppingly steep in the rise out of West Lulworth) and walk one mile west along the cliffs to Durdle Door, an outcropping of chalk and Portland stone, striated vertically where the south coast of England once collided with the coast of France pushing the rocky layers upwards. Durdle Door is a piercing about twenty feet high where the sea has worn through a weak spot in the cliff and it’s flanked by two beautiful beaches. We sit and paddle, mesmerized by and the surf.  The beach is a gravel beach of fine stones the size of ball-bearings  polished to sun-catching brilliance by the sea. The hiss of retreating breakers is accompanied by the rattling of thousands of these tiny stones.
Our B&B, in the hills above Lulworth, is situated in the middle of the tank range, their practice fire sounding like the banging of bin lids. 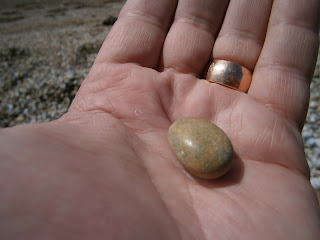 Email ThisBlogThis!Share to TwitterShare to FacebookShare to Pinterest
July 17, Lulworth Cove, Dorset
On our way down to the coast, we stop in at Jane Austen’s cottage in the village of Chawton in Hampshire.  Two yew trees stand outside the visitors’ entrance to the house. The one pictured here is two hundred years old and would have been standing when Jane lived in the house with her mother and sister. Like the women in Sense and Sensibility, the Austen women were left penniless when Jane’s father died unexpectedly. They were given use of the cottage rent free by Jane’s brother who unexpectedly inherited the estate of which Chawton was a part. In an upstairs room, I stand by the small round table, no bigger than a pizza stone, on which Jane finished Sense and Pride and Prejudice. I marvel at how simple a writer’s life was in the early 19th century, but then I’ve never had to salt a pig—something Jane would have known how to do. 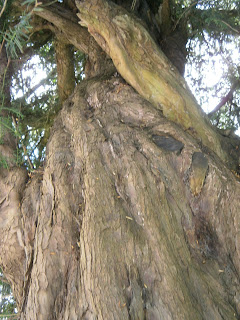 At Chawton we also learn of Jane’s naval connections; two of her brothers were admirals, a fact that inspired favourable depictions of naval officers in her novels and a love for the seaside town of Lyme Regis. I doubt the smell of fish and chips was quite as pungent along the Parade in Jane Austen’s day, but the view of the cliffs spreading eastward is still breathtaking, and the long stone pier they call The Cobb is just as it appears in Persuasion.
We also visit Thomas Hardy’s birthplace at the end of a track in a tiny hamlet outside of Dorchester. Hardy, who rose from a family of poor stone masons to become an architect before turning to literature, designed the front garden himself. In the tiny parlour, we’re invited by a National Trust animator to settle on the settle (a bench with a very high wooden back) and sit by the fire while she tells us the story of Hardy’s ancestors, his struggles with the class system in London, his retreat to Dorset, and his courtship of Emma, the Cornish rector’s daughter who became his first wife.
Posted by ANDREW J. BORKOWSKI at 9:18 AM No comments:

Today we drove up to Ham House, a National Trust property on The Thames just above Richmond. The gardens there are host to “Garden of Reason” a contemporary art exhibit. This is me installed atop one of four metal staircases that form “Compass” an installation by Brazilian artist Alexandre de Cunha. The staircases form a pedestal like those supporting conventional sculptures. By climbing it the viewer becomes a part of the artwork and the landscape. 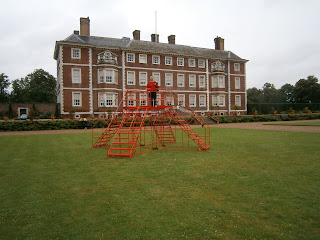 Ham House is in the background. Built in 1610, it’s distinctive among British great houses for its having escaped a neo-classical makeover in the 18th century. The interior remains Jacobean, dark, secretive—most fitting for the home of Lady Dysart, who built her career on spy work for ex iledroyalists during the reign of Oliver Cromwell.
You know you’re in England by the strange signage: “Male Toilettes” reads the indicator in the Heathrow customs hall, raising the spectre of bathroom fixtures sprouting facial hair; on the way to Ham House we are enjoined to be watchful  at crossings frequented by Humped Pelicans.
Posted by ANDREW J. BORKOWSKI at 9:15 AM No comments: 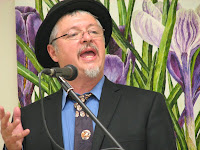 And welcome (again) to my blog! I launched this site at the same time my website went live over a year ago--and where did the time go? To make amends, I've decided to re-activate with a series of postings from our trip around England, starting next week. If the technology doesn't fail me, I'll be notifying Facebook friends of new posts as we trek from London (gingerly skirting Olympic mayhem) down to Thomas Hardy country, visit gardens galore, and take a fresh look at the settings for scenes from my novel-in-progress. If nothing appears, you'll know that I've caved to my inner Luddite.
Posted by ANDREW J. BORKOWSKI at 9:36 PM No comments: