July 29, Leek, Staffordshire
The town of Leek is known locally as the Queen of the Moorlands. It’s a market town in the Churnet Valley, once a centre in the silk trade, which drew William Morris and Co. to the area in the nineteenth century for the manufacture of their fabrics.  The heights around the town mark the beginning of Peak District National Park, a conglomeration of heather-covered moorlands, plunging dales, and spectacular outcroppings of black millstone grit in what’s known as the Dark Peak and limestone cliffs in the White Peak over in Derbyshire. 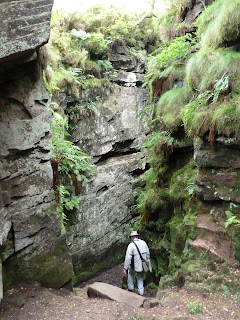 Several scenes in The Frenzy of Mad Sweeney take place in the Peaks and I’m intent on visiting one of them: Lud’s Church, a long deep chasm in the heights above the River Dane, a few miles north of Leek. I’m relieved to find the path to it well-signed as I found the directions to it on a website called It’s Not There.com. The chasm is breathtaking. We descend through a series of “chambers” that are thirty feet deep and five to fifteen feet wide. The walls are coated in emerald green moss and feathered with long grasses and ferns. Oak trees sprout from the walls near the top. Lud’s Church gets its name from the Lollards, a persecuted religious sect  which once held secret services here. The gorge is also reputed to have been the location of the duel between Sir Gawain of the Round Table and The Green Knight. There’s an outcropping along the walls that resemble a human face, said to be the malevolent Green Knight keeping watch over his preserve.
In 1993 a dead Wallaby was found at the bottom of Lud’s Church. The animal is preserved in the Nicholson Institute in Leek. Wallabies have been living on the moor above Lud’s Church since the 1930s when a batch from the London Zoo escaped from a nearby estate, where they were being temporarily housed.
On the other side of Leek, we ride a miniature-gauge steam railway along the shores of Lake Rudyard, actually a reservoir created in the 18th century to feed nearby canals. Rudyard Kipling was named for this lake after his parents visited here, and a beautiful spot it is. Lined with stone boathouses and villas, it’s a touch of Muskoka in the heart of England.
Posted by ANDREW J. BORKOWSKI at 3:55 PM 2 comments:

July 27, Longton, Stoke-on-Trent
We’re back in “the Potteries”—the name the English give to the city of Stoke-on-Trent, an amalgamation of the six Staffordshire towns that, for almost three hundred years, has served as the centre of Britain’s ceramics industry. Martha and I lived here in the late 1980s and it’s the setting for my novel-in-progress The Frenzy of Mad Sweeney. We’re here to visit old friends and I’m taking the opportunity to refresh my memory, visiting locales that serve as the backdrop for the book and brushing up on local history. 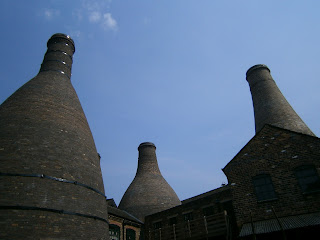 Until the 1950s the Potteries skyline was studded with the chimneys of 2,000 Brick Bottle kilns like the ones pictured here. The kilns were coal-fired and belched thick smoke that almost permanently blocked out the sun and covered buildings in black soot that can still be seen clinging to the facades of Victorian buildings in Longton. Arnold Bennett’s novels about the Potteries made him one of England’s most successful authors in the early twentieth century. He described Longton, which specialized in the production of bone china, as the Potteries town “most akin to hell.”
The use of toxics like lead and arsenic in glazes, smoke from the kilns, and the dust-filled air of Victorian “pot banks” resulted in an average life expectancy of 46 among pottery workers in 1900. Stoke-on-Trent also endured Britain’s highest infant mortality rate at that time. Health inspectors of the time noted a high rate of “lowered intelligence” among the population, the result of environmental conditions for a workforce that included 50 percent of the towns’ women, most of whom would have worked while pregnant
That all changed as the Bottle Kilns were replaced by cleaner gas and electric kilns and safer materials were introduced. But there is still something stunted and strange about the Potteries. In spite of  having created wares that adorned the tables of Catherine the Great and Teddy Roosevelt, the great pottery owners left behind little in the way of great architecture or cultural institutions. The towns still cling to the hillsides like so much stubble. 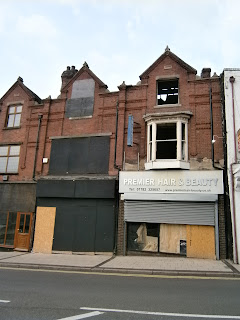 The men and women working in the Potteries enjoyed clean, safe working conditions and fair wages for a very short time.  Globalization has decimated this city. Wedgwood’s factory at Barlaston was a model to others in health and safety when it opened during the 1930s. By the 1980s it employed 2,800 people. Today there are only 200 employees at Barlaston and most of the product that bears Josiah Wedgwood’s name is made in Asia. Royal Doulton closed its works here over a decade ago. On the day of our visit, it appears that every third storefront in Longton is either shuttered or boarded up and butterfly bushes sprout from the chimney pots. The day after this photo was taken, this street had to be closed to traffic after a derelict  building collapsed.
Posted by ANDREW J. BORKOWSKI at 11:12 AM 1 comment: 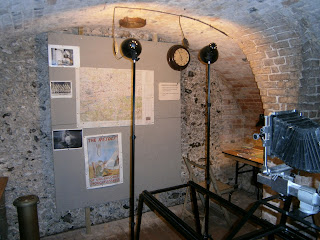 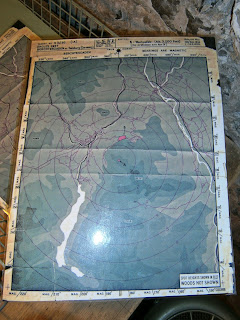 Posted by ANDREW J. BORKOWSKI at 10:50 AM No comments: